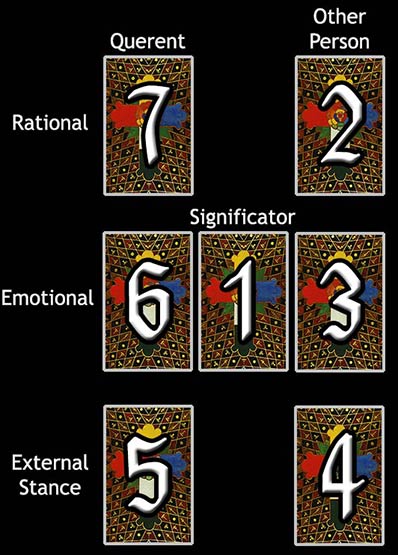 This spread is easy to read, like a convenient chart. In this spread, court cards generally indicate actual people with the same characteristics. Knights (or corresponding Princes, but not Kings) and Queens are meant to represent actual men and women in this tarot spread. Look for patterns in the cards as always.

The top row, cards #7 & 2, shows the conscious thoughts of each person, or what they think about the relationship and likewise how they view their partner.

The middle row, cards #6 & 3, shows the way each individual feels about the other. Emotional awareness corresponds to a person’s unconscious thoughts that run deep, effecting a person in ways he or she is not fully aware of.

The bottom row, cards #5 & 4, represents the way each person behaves, in other words the stance taken regarding the relationship. The way a person acts may be genuine, but sometimes people are phony and manipulative, so it is best to weigh this card against your partner’s other cards to determine if they match up.

This card is referred to Geburah of the suit of Fire. Geburah itself being fiery, it is a purely active force. It is ruled also by Saturn and Leo. Leo shows the element of Fire at its strongest and most balanced. Saturn tends to weigh it down and to embitter it. There is no limit to the scope of this volcanic energy.

The symbol represents the wand of the Chief Adept, showing that the authority is derived from the superiors; were it not so, this card would be thoroughly disastrous. Moreover, there are also two wands of the Second, or Major Adept. They have the head of the Phoenix, which gives the idea of destruction (or rather purgation) through fire, and the resurrection of the energy from its ashes. 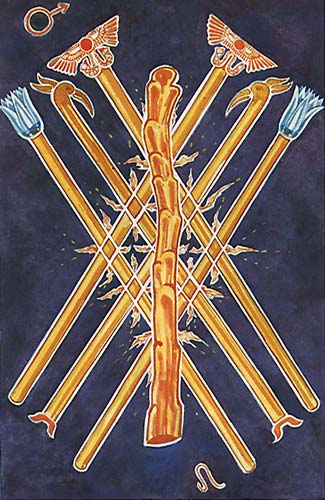 This card derives from Netzach (Victory) in the suit of Fire. But the Seven is a weak, earthy, feminine number as regards the Tree of Life, and represents a departure from the balance so low down on the Tree that this implies a loss of confidence.

Fortunately, the card is also attributed to Mars in Leo. The army has been thrown into disorder; if victory is to be won, it will be by dint of individual valour - a "soldiers' battle".

The Other Person's Thoughts

Chesed refers to Jupiter who rules in Libra in this decanate. The sum of these symbols is therefore without opposition; hence the card proclaims the idea of authority in the intellectual world. It is the establishment of dogma, and law concerning it. It represents a refuge from mental chaos, chosen in an arbitrary manner. It argues for convention.

The hilts of the four Swords are at the corner of a St. Andrew's cross. Their shape suggests fixation and rigidity. Their points are sheathed -- in a rather large rose of forty-nine petals representing social harmony. Here, too, is compromise.

Minds too indolent or too cowardly to think out their own problems hail joyfully this policy of appeasement. As always, the Four is the term; as in this case there is no true justification for repose, its disturbance by the Five holds no promise of advance; its static shams go pell-mell into the melting-pot; the issue is mere mess, usually signalized by foetid stench. But it has to be done!

This card represents Tiphareth of the suit of Fire. This shows Energy in completely balanced manifestation. The Five has broken up the closed forces of the Four with revolutionary ardour, but a marriage has taken place between them; and the result is the Son, and the Sun.

The reference is also to Jupiter and Leo, which seems to imply a benediction on the harmony and beauty of this arrangement. It Will be seen that the Three Wands of the Three Adepts are now orderly arranged; and the flames themselves, instead of shooting out in all directions, burn steadily as in lamps. They are nine in number, in reference to Yesod and the Moon. This shows the stabiliza tion of the Energy, and its reception and reflection by the Feminine.

There is no circle to enclose the system. It is self-supporting, like the Sun.

The Other Person's Emotions

The Other Person's External Stance

This card represents the airy part of Air. This chariot is drawn by winged children, looking and leaping irresponsibly in any direction that takes their fancy; they are not reined, but perfectly Capricious. The chariot consequently is easy enough to move, but quite unable to progress in any definite direction except by accident. This is a perfect picture of the Mind.

The operation of his logical mental processes have reduced the Air, which is his element, to many diverse geometrical patterns, but in these there is no real plan; they are demonstrations of the powers of the Mind without definite purpose. In his right hand is a lifted sword wherewith to create, but in his left hand a sickle, so that what he creates he instantly destroys. A person thus symbolized is purely intellectual. He is full of ideas and designs which tumble over each other. He is a mass of fine ideals unrelated to practical effort. He has all the apparatus of Thought in the highest degree, intensely clever, admirably rational, but unstable of purpose, and in reality indifferent even to his own ideas, as knowing that any one of them is just as good as any other. He reduces everything to unreality by removing its substance and transmuting it to an ideal world of ratiocination which is purely formal and out of relation to any facts, even those upon which it is based.