Secret of the High Priestess Spread

This spread is a nice alternative to the Celtic Cross, which covers basically the same ground. It is useful when a question doesn’t quite call for the Ankh spread. This spread is helpful when you are looking into a current trend. The High Priestess may or may not present a mysterious secret to be analyzed after the rest of the spread.

1. and 2. Main impulses that represent the topic at hand. They may compliment or oppose one another.

3. This is the current influence at this time.

5. The Waning Moon is the influence that you are putting behind you, what is moving into the past.

4. The Waxing Moon indicates what is on the horizon, or the approaching influence. This is the immediate future.

7. The Light is what is clearly recognized, what is conscious.

6. The Dark shows what is there but not fully perceived, though noticed on a deeper level of consciousness.

8. The Next Step is the near future, where this journey will take you.

9. The last card, if it happens to be of the Major Arcana, reveals the Secret of the High Priestess. This is a special message that you should pay extra special attention to.

Your Secret of the High Priestess Reading 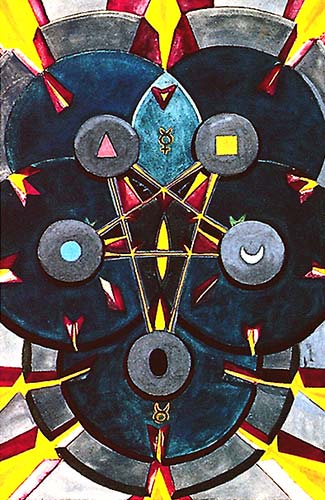 The Waning Moon is the influence that you are putting behind you, as it moves into the past. 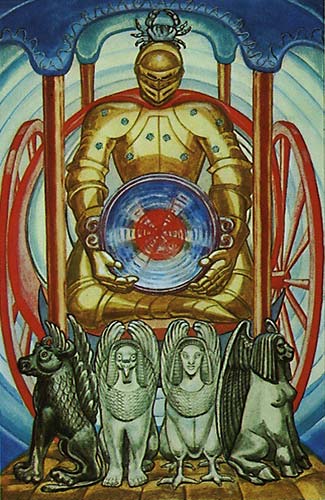 The number Two, Chokmah, here rules in the suit pertaining to Earth. It shows the type of Energy appropriate to Two, in its most fixed form. According to the doctrine that Change is the support of stability, the card is called Change.

The card represents two Pantacles, one above the other; they are the Chinese symbols of the Yang and Yin duplicated as in the Hsiang. One wheel is dextro- and the other laevo-rotatory. They thus represent the harmonious interplay of the Four Elements in constant movement. One may in fact consider the card as the picture of the complete manifested Universe, in respect of its dynamics.

The Full Moon is the current influence at this time.

The Waxing Moon indicates what is on the horizon; the approaching influence. 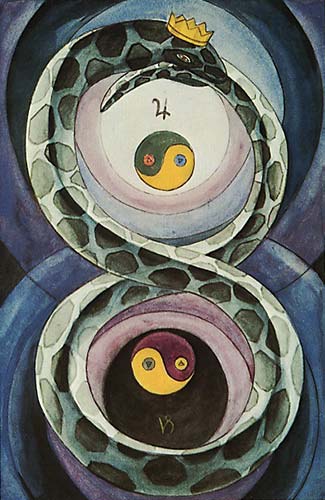 Lotuses droop for lack of sun and rain, and the soil is poison to them; only two of the stems show blossoms at all. The cups are shallow, old and broken. They are arranged in three rows; of these the upper row of three is quite empty. Water trickles from the two flowers into the two central cups, and they drip into the two lowest without filling them. The background of the card shows pools, or lagoons, in very extensive country, incapable of cultivation; only disease and miasmatic poison can flourish in those vast Bad Lands. The water is dark and muddy. On the horizon is a pallid, yellowish light, weighed down by leaden clouds of indigo.

The Light is what is clearly recognized. 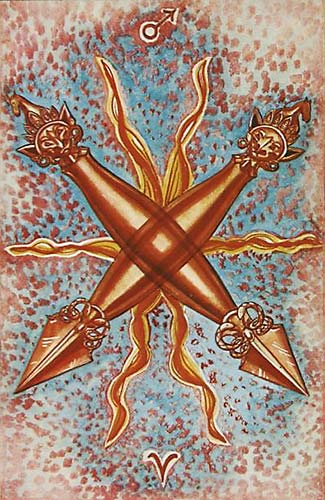 The Knight of Swords represents the fiery part of Air; he is the wind, the storm. He represents the violent power of motion applied to an apparently manageable element. He is a warrior helmed, and for his crest he bears a revolving wing. Mounted upon a maddened steed, he drives down the Heavens, the Spirit of the Tempest. In one hand is a sword, in the other a poniard. He represents the idea of attack.

The moral qualities of a person thus indicated are activity and skill, subtlety and cleverness. He is fierce, delicate and courageous, but altogether the prey of his idea, which comes to him as an inspiration without reflection.

The Dark shows what is there but not fully perceived, though it has been noticed on a deeper level of consciousness.

This card, pertaining to Chokmah in the suit of Fire, represents the Will in its most exalted form. It is an ideal Will, independent of any given object.

"For pure will, unassuaged of purpose, delivered from the lust of result, is every way perfect." AL. 1. 44.

The background of this card shows the power of the planet Mars in his own sign Aries, the first of the Signs. It there represents Energy initiating a Current of Force. The pictorial representation is two Dorjes crossed. The Dorje is the Tibetan symbol of the thunderbolt, the emblem of celestial Power, but more in its destructive than its creative form. More, that is, in its earlier rather than its later form. For destruction may be regarded as the first step in the creative process. The virgin ovum must be broken in order to fertilize it. Fear and repulsion are therefore the primary reaction to the assault. Then, with understanding of the complete plan, willing surrender rejoices to co-operate. Six flames issue from the centre. This indicates the influence of the Sun, who is exalted in Aries. This is the creative Will.

The Next Step is the near future, where this journey will take you. 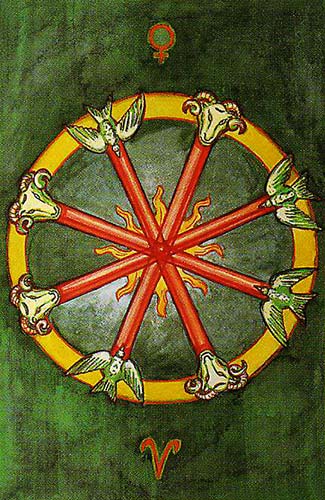 This card refers to Chesed in the suit of Fire. Being below the Abyss, it is the Lord of all manifested active Power. The original Will of the Two has been transmitted through the Three, and is now built up into a solid system: Order, Law, Government. It is also referred to Venus in Aries, which indicates that one cannot establish one's work without tact and gentleness. The wands are headed by the Ram, sacred to Chesed, the Father-god Amoun-Ra, as also to Aries; but at the other end of the wands are the Doves of Venus.

In the symbol, the ends of the wands touch a circle, showing the completion and limitation of the original work. It is within this circle that the flames (four double, as if to assert the balance) of the Energy are seen to play, and there is no intention to increase the scope of the original Will.

The Knight of Cups represents the fiery part of Water, the swift passionate attack of rain and springs; more intimately, Water's power of solution. He is clothed in black armour furnished with bright wings which, together with the leaping attitude of his white charger, indicates that he represents the most active aspect of Water. In his right hand he bears a cup from which issues a crab, the cardinal sign of Water, for aggressiveness. His totem is the peacock, for one of the stigmata of water in its most active form is brilliance. There is here also some reference to the phenomena of fluorescence.

The characteristics of the person signified by this card are nevertheless mostly passive, in accordance with the Zodiacal attribution. He is graceful, dilettante, with the qualties of Venus, or a weak Jupiter. He is amiable in a passive way. He is quick to respond to attraction, and easily becomes enthusiastic under such stimulus; but he is not very enduring. He is exceedingly sensitive to external in fluence, but with no material depth in his character.