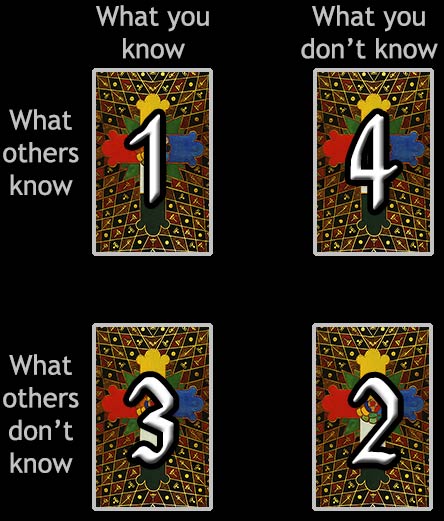 This spread is used to enhance self-awareness. Questions about learning something about yourself or things that are hidden work very well with this spread, but actually no question is necessary.

This card displays your obvious identity, the part of you that everyone knows.

This card refers to Binah in the suit of Fire, and so represents the establishment of primeval Energy. The Will has been trans mitted to the Mother, who conceives, prepares, and gives birth to, its manifestation. It refers to the Sun in Aries, the Sign in which he is exalted.

The meaning is harmonious, for this is the beginning of Spring. For this reason one sees the wand taking the form of the Lotus in blossom. The Sun has enkindled the Great Mother.

This card shows unconscious driving forces that neither you nor your company is aware of about you. This is the Great Unknown.

Chesed refers to Jupiter who rules in Libra in this decanate. The sum of these symbols is therefore without opposition; hence the card proclaims the idea of authority in the intellectual world. It is the establishment of dogma, and law concerning it. It represents a refuge from mental chaos, chosen in an arbitrary manner. It argues for convention.

The hilts of the four Swords are at the corner of a St. Andrew's cross. Their shape suggests fixation and rigidity. Their points are sheathed -- in a rather large rose of forty-nine petals representing social harmony. Here, too, is compromise.

Minds too indolent or too cowardly to think out their own problems hail joyfully this policy of appeasement. As always, the Four is the term; as in this case there is no true justification for repose, its disturbance by the Five holds no promise of advance; its static shams go pell-mell into the melting-pot; the issue is mere mess, usually signalized by foetid stench. But it has to be done!

The secrets you keep from others are shown by this card.

The Princess of Cups represents the earthy part of Water; in particular, the faculty of crystallization. She represents the power of Water to give substance to idea, to support life, and to form the basis of chemical combination. She is represented as a dancing figure, robed in a flowing garment on whose edges crystals are seen to form.

For her crest she wears a swan with open wings. The symbolism of this swan reminds one of the swan in oriental philosophy which is the word AUM or AUMGN, which is the symbol of the entire process of creation. She bears a covered cup from which issues a tortoise. This is again the tortoise which in Hindu philosophy supports the elephant on whose back is the Universe. She is dancing upon a foaming sea in which disports himself a dolphin, the royal fish, which symbolizes the power of Creation. The character of the Princess is infinitely gracious. All sweetness, all voluptuousness, gentleness, kindness and tenderness are in her character. She lives in the world of Romance, in the perpetual dream of rapture. On a superficial examination she might be thought selfish and indolent, but this is a quite false impression; silently and effortlessly she goes about her work.

This is your Blind Spot. This is what you asked about - what you wished to be made aware of by this reading.

The Two always represents the Word and the Will. It is the first manifestation. Therefore, in the suit of Water, it must refer to Love, which recovers unity from dividuality by mutual annihilation. The card also refers to Venus in Cancer. Cancer is, more than any other, the receptive Sign; it is the House of the Moon, and in that Sign Jupiter is exalted. These are, superficially, the three most friendly of the planets.

The hieroglyph of the card represents two cups in the foreground, overflowing upon a calm sea. They are fed with lucent water from a lotus floating upon the sea, from which rises another lotus around whose stem are entwined twin dolphins.

The number Two referring to Will, this card might really be renamed the Lord of Love under Will, for that is its full and true meaning. It shows the harmony of the male and the female: interpreted in the largest sense. It is perfect and placid harmony, radiating an intensity of joy and ecstasy.